Kim Kardashian's lastest exploit was to publish a book of more than 400 of her selfies. I read a really well-written review of the book and the phenomenon that is Kim K by Laura Bennett that you can read in full here. I have gone ahead and picked out the best (funniest) parts and put my own two-cents'worth in.

“Unlike the many other gussied-up ingénues who rose through the ranks of reality TV, Kim Kardashian’s public image has always been a uniquely nimble balancing act. She manages to project a whole mess of seemingly incompatible traits: wholesome (family values) and scandalous (sex tapes), self-aware (jokes about her own materialism) and oblivious (carrying a Hermès bag painted by her 1-year-old child), highbrow (Vogue covers) and gauche (photo shoots of her butt). Even before Kanye West helped grease her entry into pop culture’s inner sanctum, she’d somehow cemented an image as the most grounded of reality TV’s leading ladies, the usual whiff of desperation counterbalanced with more apparent ownership of her song-and-dance.”

The above is probably one of the greatest reasons why Kim Kardashian has caught the attention of people the world over. A friend lamented that she didn’t really know how she knew so much about Kim K and her equally attention-seeking sisters seeing as she’d never watched her reality TV show. Beside the assault of media coverage about the Kardashian clan, I think the fascination with Kim is a product of the fact that she embraces her materialism and obsession with making herself (or to be more precise, her body, known to the world) and yet seeks to project a completely contradictory, wholesome image. Feminists might say that implying that the he exposed female form and the idea of a wholesome image cannot co-exist is problematic. You see, the thing is Kim K is not trying to make a bigger statement. She is no bra-burning feminist. She is not the first woman in history to bare it all to the public eye, but I do believe she is amongst the first to do publicly, on such a great scale, for no other reason than self-indulgence. It’s probably true that she does it for the money too, but she’s the daughter of a famous celebrity lawyer, she didn’t really need it.

This book, needless to say, does not have grand literary ambitions. It has no literary ambitions at all. It barely has words. The words it does contain are so aggressively repetitive that they feel like a true feat of editorial indifference. “Bikini selfies are my favorite,” Kim remarks in one caption. “Bikini selfies are my fave,” she later adds. She is not coy with her themes. “The pictures in this book bring back so many memories,” she writes. Then: “I love that we have these memories.” Also: “These pics bring back so many memories.” Not to mention: “I love doing photo shoots and having memories.” I’ve never seen someone make so little effort to be interesting—a banality so confident it feels like a revelation. “I love,” she writes at one point, “that I have thousands of pics.”Some selfies are fascinating for their lack of context, like the picture of Kim in a construction hat captioned only: “I was in Africa in a diamond mine.” Some feature perfect comic timing, like the page that includes a photo of Kim behind the wheel of a car and the words, “I took a selfie at a red light while driving. I think that’s illegal now.”

Another problem with the “Kim K” culture is that it encourages one to revel in the frivolous all the time. It praises making statements that don’t make sense or mean very much precisely because so little thought has been put into them. If you instinctively wrinkle your nose at such an idea, your convictions are suspended when you are met with an avalanche of images that seem to suggest how such behavior leads to success. For example, you’ll see a clip of Kim K making a mundane, rhetorical statement about her nails or something—then the next scene will be of her beautiful LA home, complete with palm trees and a picture-perfect cerulean sky in the background. You’ll be shown a scene in which she uses the phrase “like, literally” way too many times only for it to be immediately juxtaposed with a scene of her wearing the finest clothing available. It doesn’t take much to put two and two together. Part of the appeal of Kim Kardashian is the way she turns being ignorant and superficial into a glamorous pseudo-art form— probably all without even realizing it.

“This is the source of much of Selfish’s appeal: Yes, it is obsessed with surfaces, and it is bracingly unapologetic about that obsession. Kim doesn’t even pretend to view the world as more than a scenic backdrop for her own embellished face. “I don’t think I’ve ever taken as many selfies as I did in Thailand. It’s one of the prettiest places I’ve ever traveled to!” she tells us, posing before a sliver of Thailand mostly obscured by her hair. She makes zero effort to encourage you to like or identify with her; she casually assumes a certain commonality of caste. “Helicopter ride from the Hamptons to the city,” she writes, or “This amazing chateau had an entire room that was an aquarium.” One highlight is a vignette about the time she put on a green Lanvin dress in a restaurant bathroom during a dinner with Kanye. Why? “There were so many paparazzi that showed up while we were eating. I wanted to change into a dope new look.”

If Kim K is nothing like us, then why do we want to know so much about her? Do we aspire to be like her? Or does the fact that she doesn’t even try to relate to her viewers what shocks and intrigues us at the same time?

"So the boldest thing about Selfish is not just that she’s inviting you to look at her several hundred times over—it’s that she’s forcing you to look at her the exact way she wants you to, from the exact angle, in the exact lighting of her choosing. You could call Selfish a sneakily feminist document, an act of reclamation by one of the world’s most photographed women. But that would be ridiculous. Forget the male gaze, or even the female gaze—the only gaze that matters here is Kim Kardashian’s, directed squarely at herself, Kim Kardashian looking at Kim Kardashian back and forth until the end of time."

I think it's safe to say that Kim K has a larger grip on us then we want to let ourselves believe. There are now apps to block content about her from the Internet appearing on your screens, the magnitude of frivolity and self-indulgence she represents is pervasive. To me Kim Kardashian represents an enigma and a challenge to my own struggle to stay grounded in a society increasingly enamored with surfaces. 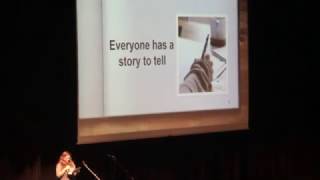